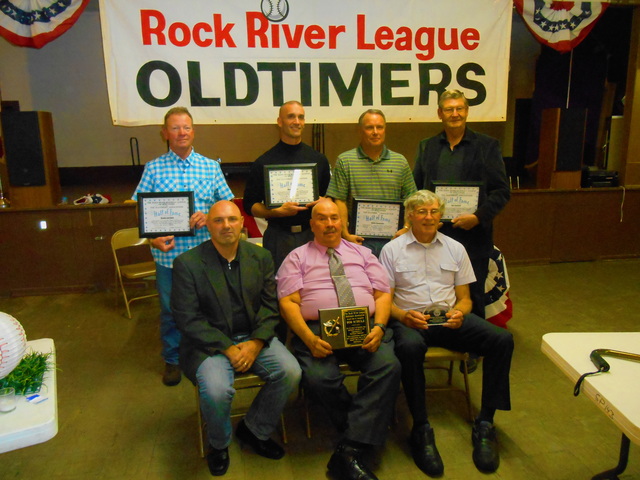 Congrats to the 2017 Rock River Hall of Fame inductees shown below. They were honored at this year's Old Timers Banquet on Saturday, October 21st at the Lions Hall in Clyman.

Randy Lorrigan – 60, lives in Hartford and is a carpenter. Randy was a pitcher, outfielder and first baseman for Rubicon from 1972-1980. Randy’s top achievement was being named to 3-4 All Star teams. Humorous incident – He enjoyed watching right fielders play the right field hill in Rubicon. They would go back on a fly ball, not aware of the incline and usually stumble and fall, losing the ball! Randy’s top opponents were Don Held of Lebanon and Kirk Kaul of Hustisford.

Dan Schauer - 39, lives in Watertown and is a Sales Rep for River City Distributing. Dan was a catcher and outfielder for Clyman from 1996-2011. Dan was part of 4 Rock River League Grand Championship teams (2000, 2007, 2008 and 2009), was Southern Division MVP in 2010 and once hit 4 home runs in a game at Neosho (from the 9 hole). Humorous incident – In reference to Tim Mommaert’s Hall of Fame speech last year, I was the “anonymous “teammate that ate Tim Fitzsimmons mustache after winning the 2008 Grand Championship in Brownsville. I made the bet and am a man of my word. For the record, it was not the smartest thing I’ve ever done! Dan’s top opponents were O. J. Sukow of Helenville, Shane O’Hagen of Rubicon and Lance Pirkel of Watertown and Helenville.

Craig Bunkoske – 56, is a Business Manager and Business Owner and lives in Beaver Dam. Craig played shortstop for the Horicon Honkers from 1979-1999. While many of the nominees list their statistics and top games for their achievements, Craig has a different look on this area. “My greatest achievement and goal was after I ran into Ron Beall in right field and had 7 hours of reconstructive surgery on my right shoulder. The UW surgeon that performed the surgery told me I had a 50/50 chance of ever throwing a ball again. I wanted to prove him wrong and set 2 goals for myself; – To be selected to the RRL All Star Game again and 2 – To pitch a complete game. I accomplished both feats in 1998 I believe and left the game the way I wanted to leave. Craig’s humorous story was during a SWABA Finals game in Lebanon in the mid to late 1990’s. Mike Firehammer thought he had tagged a guy out at 2nd base, but the umpire called him safe. Mike turned around to the umpire (who was quite a bit shorter than Mike) and said he tagged him on the head like this and Mike proceeded to tag the umpire on the top of the head. Carl Schwarze was the home plate umpire. He took his mask off laughing really hard and said “Pipes, you know you can’t do that! You’re gone! Mike flashed his big smile, started to walk off the field and turned to Carl and said “But I did tag him on his head!” Craig’s top opponents were Mark Loomans of Waupun, Kirk Kaul of Hustisford and Mike Zimmerman of Oakfield.

Ron Bartels – 71, is retired and living in Watertown. “I am truly honored to be nominated to the Rock River League Hall of Fame since I only played 1 game in the “Rock”. My “Rock” career was and is spent on the sidelines. I moved to Wisconsin in 1984 and moved next door to Ernie Rolon, manager of the Watertown Cardinals. Part way through the 1984 season, I started keeping score for the Cardinals. I did that for 13 years until a job change required me to work on Sundays. Since I am just an “old” man who loves watching baseball, I continued to follow the Cardinals as much as I could. Several years ago, I was elected Secretary of the Rock River League and have since added the Treasurer’s duties as well. I just hope to do my part to contribute to the success of the Rock River League for many more years. Since I only played one game in the league, I have to elate what happened the fifth time I came up to bat. 1 was 1 for 4 coming into that at bat with 2 runs batted in. During that at bat, the pitcher threw me a change-up that I laced just foul down the left field line. The pitcher shouted from the mound to the catcher “Let’s not call that pitch again”! I couldn’t understand why they would since I wasn’t catching up to the fastball. I gave up playing when the pitchers’ started throwing curveballs. Ron is listing the top players he has watched play. 1. Kevin Murphy could play any position but pitcher. I would never have pitched to Kevin during a Grand Championship game. He must have batted .600 or more during championship games for the Cardinals. 2. Kirk Kaul – A dominating pitcher for Hustisford for many years. I don’t remember the Cardinals ever beating him. 3. Jason Wesemann – Clyman. An outstanding hitter and pitcher for the Canners..